Alam is recognized as one of the most prominent figures in Kuala Lumpur’s music scene. Having always been obsessed with music, Alam decided to push himself by testing the waters of his musical inspiration. Now, this DJ/Producer has made a name for himself, not only is he one of the backbones behind KL’s leading music establishments, but he has definitely proven himself to be considered as one of today’s generation firing up the local and international clubbing scene. Alam has always been upfront with what he does; showing his versatility by mixing diverse forms of style and genre, from his smooth blends of house music to his unparalleled selection of techno grooves. Regardless, he manages to deliver an experience of sound, which always leaves the crowd with wanting more. Since beginning his career 20 years ago, Alam has held up residencies at most of the major venues around town, including Kuala Lumpur’s premier underground club; The Backroom*KL, while making guest appearances at the legendary Zouk Club, Ministry of Sound KL, Nouvo, Elysium, and Jiro just to name a few. Over the years, Alam has established himself as a reputable individual having received the utmost respect around the region at iconic cities such as Ibiza (Eden / Ibiza Rocks Bar / Es Paradis), United Kingdom (Egg London), Bali (JENJA), Singapore (Kilo Lounge / Kyo), Hong Kong (Oma), Vietnam (Epizode Festival), Bangkok (Mustache), Koh Samui (ChaChaMoon / Nikki Beach), Saigon (The Light House / Broma Not A
Bar), Koh Phangan (Full Moon Party), as well as Indonesia’s infamous Stadium Jakarta & Embassy / Co2. In 2005, Alam moved to Australia, where he developed an impressive following playing alongside Melbourne’s finest and hosting his own successful nights at some of the city’s forefront venues. It was his residency with Darkbeat that kick started his international career, leading to opportunities of supporting world-renowned event brands such as Balance Music, Future Entertainment, and Hardware Corp, followed by a number of appearances on Kiss FM – Australia’s Dance Music Channel. After 7 years based overseas, Alam has returned home to KL and joined Ohrwurm as a third partner. As one of the few well-respected institutions dedicated to hosting quality shows, this collective have been responsible for touring iconic names from John Digweed, Pan-Pot, Danny Howells, Phil Weeks, Radio Slave, to live acts Guti, KiNK and Stimming amongst countless others. With all those names mentioned, Alam has also had the privilege of playing alongside a remarkable list of artists, which includes the likes of Joris Voorn, Nic Fanciulli, Hernan Cattaneo, Stacey Pullen, Seth Troxler, Jamie Jones, Dubfire, Moodymann, Kenny Dope, Derrick Carter, Nick Curly, Robert Hood, Butch, Ashley Beedle and more. On the production note, his ‘Kaleidosimple EP’ is released on Redflux Cinnabar through Beatport and Juno Download, with remixes from Nick Robson, Rodrigo Soria, and Yuuki Hori. The release has been charted numerous times and received widespread praise with support from DJs on shows like Frisky Radio and Proton Music. In 2014, Alam launched his own recording studio called Decibel Soundlab, which is a one-stop resource for all kinds of audio related productions. The following year, Alam was selected as a resident at the newly opened Kyo KL. The club brand has been one of Singapore’s most popular underground nightclubs. A pioneering figure in today’s entertainment industry with an impressive background since his formative years, yet there is still much more to come, as this is only the beginning of another musical chapter as Alam continues to push his career immensely across the global dance music culture. 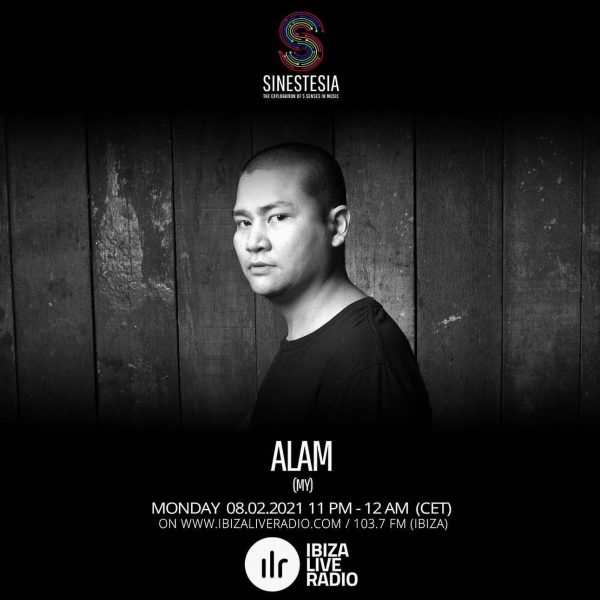